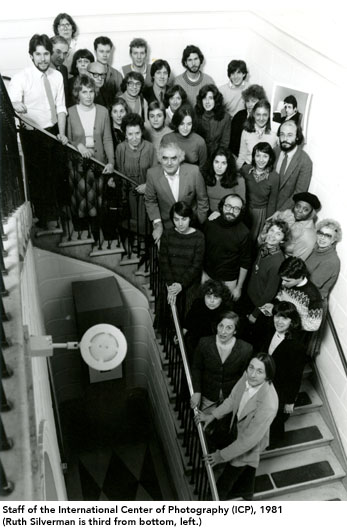 Ruth Silverman, the noted photographer, curator, and author, died in her home in Berkeley, California, on April 10. She was 78. The cause was complications from Parkinson’s disease. She is remembered for her groundbreaking career as a curator of photography; her influential, award-winning, and charming photography book “The Dog Observed;” and as the fine-art dealer who introduced Asian photography to U.S. collectors.

“Ruth Silverman is a treasure,” wrote Cameron Woo, publisher of Bark magazine, in the February, 2015. “She combines a curator’s eye for fine photography with a lifelong passion for dogs. It has resulted in two seminal books The Dog: 100 Years of Classic Photography and The Dog Observed, numerous photo exhibits and a personal collection that rivals many museums. … Ruth is one of those people who seem to know everyone, after having been a curator for the International Center of Photography in New York, as well as a successful photojournalist. She takes delight in connecting creative parties, be it in art, writing or publishing—Ruth is a cultural matchmaker.”

Ruth Silverman was born August 3, 1936, the only child of Rose, a homemaker, and Mose Silverman, a lawyer. She was raised in Omaha, Denver, and Silver Spring. Upon graduation from high school, she was given a trip to Europe and a camera. It was the beginning of a life-long passion.

She began her professional life in Washington, DC, as a photojournalist, shooting for L’Express, Time, and Washingtonian, as well as the US Office of Economic Opportunity. She gained a reputation as a sensitive portraitist–especially of children–producing nuanced work for notable Washington families.

In 1978, photography legend Cornell Capa named Silverman associate curator of the International Center of Photography (ICP), which he had established in 1974 in New York. It was a noted accomplishment for a woman in the male-dominated museum world of the 1970s. Working closely with Capa, she organized more than 100 exhibitions including “Fleeting Gestures: Treasures of Dance Photography 1978,” “Bernice Abbott: The 20s and 30s,” and shows on Henri Cartier-Bresson and Diana Vreeland. As an independent curator, she later organized exhibitions for ICP, The Smithsonian Institution, and Paine-Webber, among others.

In 1984 she published “The Dog Observed: Photographs 1844-1983” (Knopf), a history of photography that moved from the earliest formal daguerreotypes to Robert Capa’s war photography, through Robert Doisneau’s romantic images and Richard Avedon’s high style – each image capturing a dog. It was named photography book of the year by Nikon and became a classic. The book and its follow-ups, including “The Dog: 100 Years of Classic Photography” (Chronicle), are staples of the bookshelves at museum gift-shops, art libraries, and curator’s private collections. She published “Athletes: Photographs 1860 to 1986” (Chronicle), also named photography book of the year by Nikon, “San Francisco Observed: A Photographic Portfolio from 1850 to the Present” (Chronicle), a critical work on the Chinese/Vietnamese photographer Don Hong-Oai, and other books.

In 1990 she moved to California, where she opened Photos Gallery, first in San Francisco and later in Berkeley. She represented the work of Asian fine-art photographers, introducing Daido Moriyama, Masahisa Fukase, Jungjin Lee, Kozo Miyoshi, and Don Hong-Oai to American collectors. She also represented the American photographer Imogen Cunningham.

A life-long friend to dogs (her life-long roster included Lumière, Jeff, Jessie, Noodle, Tomato, Wanda, Mickey, Mitzi, and Fuzzy), Silverman spent her final months organizing the “Good Dog Art Exhibition and Silent Auction,” to benefit the San Francisco SPCA and The Humane Society of the U.S. Pulling renowned works from her expansive private collection and drawing on her deep Rolodex of artist friends and clients, she compiled a catalog that including works by William Wegman, Linda Connor, Michael Kenna, Elliott Erwitt, Art Rogers, Beth Moon, and Bill Dane. The feat was stunning and generous, as was she. She is survived by her many friends.